Update: Midwest Energy's Board of Directors voted to approve the following rate changes, affecting all electric customers, at a special member meeting on July 16, 2018.

Midwest Energy is seeking Board of Directors approval for new electric rates, which would be roughly revenue-neutral for the company.  This is the first general rate change since 2011, and it is needed to address significant differences between similar customers on the M and W Systems, as well as simplify rate structures by eliminating summertime block rates.

The W system was purchased from Westar Energy in 2003, and as a condition of that sale rates for W system customers were to be gradually combined with Midwest Energy’s M system rate schedules.  The proposed rate changes mostly close existing differences.

The new rates include an increase in the fixed monthly customer charge for most rate schedules, which in most cases would be partially or completely offset by lower energy costs.  If adopted, the proposed rate changes will be phased-in over a 3-year period.

Lastly, these changes slowly eliminate regular residential block rates, where customers pay a higher energy charge in certain months when they use more energy.  Many customers find block rates confusing.   At the end of three years, the proposed changes will produce a simpler bill with lower year-round energy charges for most customer classes, which also more accurately reflects each customer’s costs to the grid.

Q:  Why is this rate change necessary?
A:  The overall revenue for Midwest Energy will increase a relatively small amount, although costs of capital improvements plus operating and administrative expenses have increased since the last general rate case in 2011.  The primary reasons for the changes are to gradually consolidate M and W system rates and simplify rate designs.

Q:  How do you determine what Customer Charges should be?
A:  An independent cost-of-service study was performed this year to fairly assign costs across rate schedules.  A cost-of-service study identifies the cost of providing service to each rate schedule as a function of load and service characteristics.  These studies provide a useful guideline for assigning cost responsibility to each customer classification in a way that is fair and equitable. 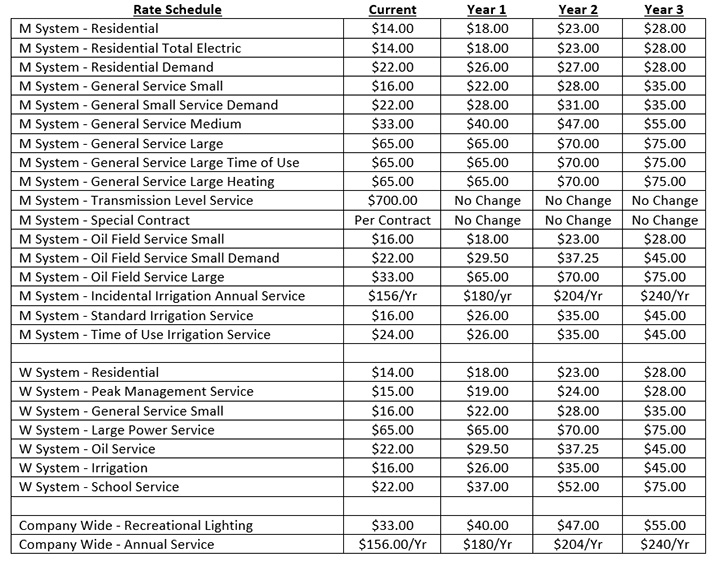 Q:  How much will my bill change?
A:  Based on rate classification and consumption, the impact will vary – an overall bill may increase or decrease.  Below are examples of impacts on residential and irrigation rates: 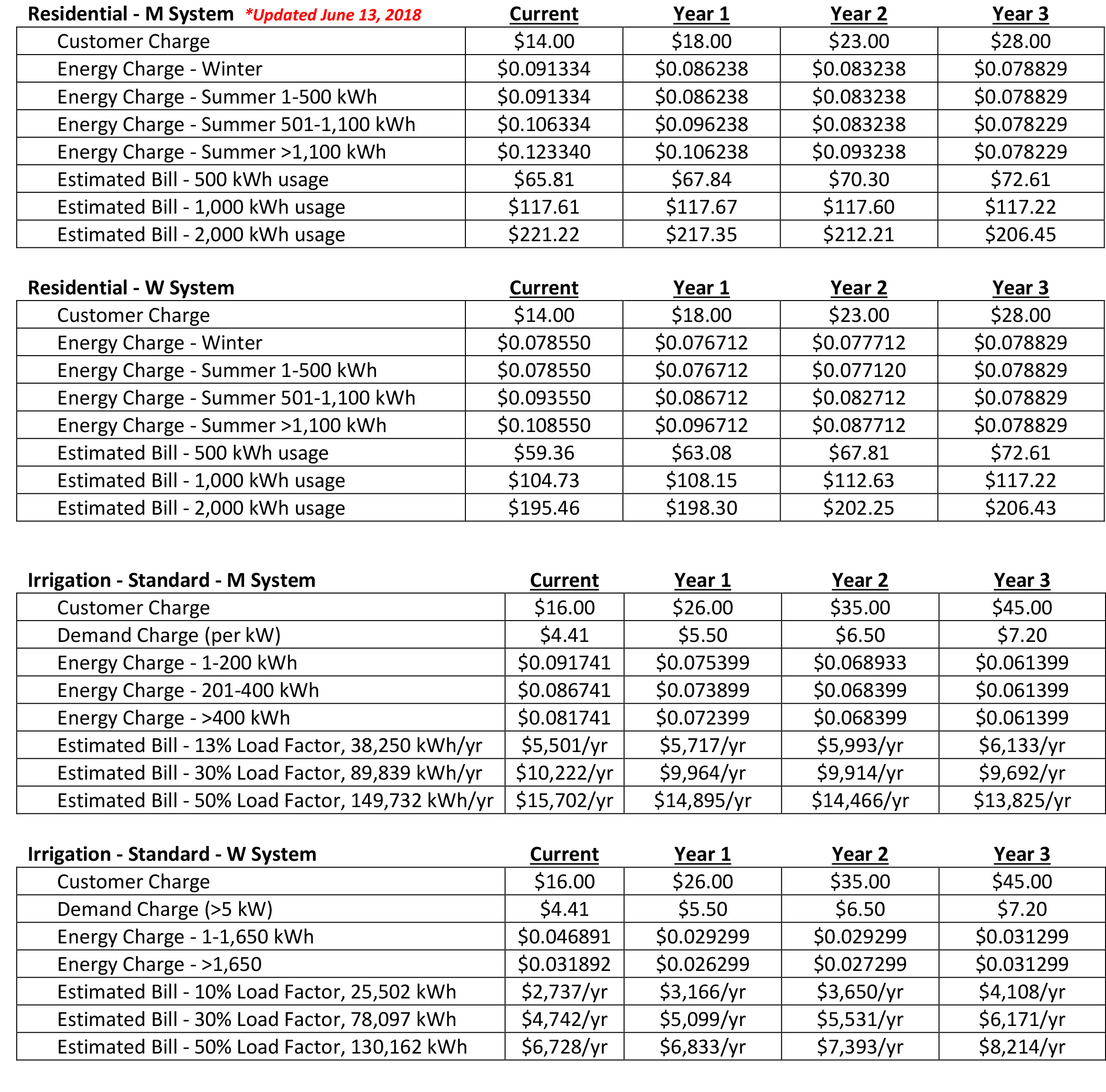 Given that other rate classes for medium- and large-sized customers incur demand rates, load factors vary significantly.  Customers wanting to know the impact of the proposed rate changes on their accounts can contact Michael Billinger, Manager of Rates and Demand Response, at 785-625-1461.  He will provide information tailored to individual accounts.

Q:  Earlier, it was mentioned this rate change addresses significant differences between similar customers.  Which rate schedules does that affect?
A:  The proposed changes bring residential M & W system customers closest to equalization.  In other rate classes, similar customers will pay much closer rates than they did previously, although they won’t be quite equal after three years.  This is because the proposal limits increases to any one group of customers to no more than 10% in one year, with the exception of W system irrigators.

Q:  Are changes proposed for any other rate schedules?
A:  Yes, most electric rate schedules will have revisions, which reflect the proposed rate changes, Midwest Energy’s self-regulated status, and/or clarify the terms of service.  All revised rate schedules have been posted.  Additionally, a comparision of present and recommended rate schedules is also available.

Q:  When was the last base rate change?
A:  Midwest Energy’s last general rate increase was in 2011, which resulted in a 1.3% revenue increase.  Midwest Energy works hard to control costs, and by employing cost-saving technology and improved procedures, we have avoided a general rate proceeding for seven years.  However, this year’s cost-of-service study revealed a huge disparity between similar customers on different systems, and a critical need to update our rate structures.  This rate change is generally revenue-neutral, but a larger share of costs will be recovered from the fixed monthly customer charge, while energy costs will decline.

Q:  Who determines when a rate increase is necessary, and by how much?
A:  Midwest Energy’s Board of Directors and executive staff continuously monitor the financial stability of the cooperative to determine if or when a rate increase is necessary.  To establish the new rate structure, an independent, experienced firm was hired to conduct a cost of service study, and recommend changes to our rates.

Q:  What is the effective date of the new rates, and when would I see them on my bill?
A:  If approved by the Board of Directors, the revised rates would take effect January 1, 2019.

Lastly, you can attend the open Board meeting where the proposed changes will be voted on Monday, July 16, at 1 pm at Midwest Energy headquarters, 1330 Canterbury Dr. in Hays.